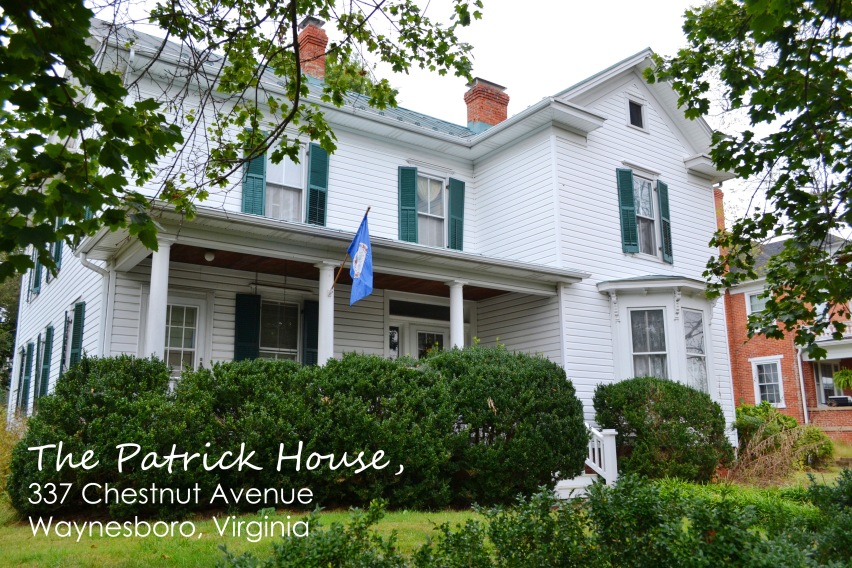 It all started with a house…

In this specific case, the house located at 337 Chestnut Avenue. This American Folk Victorian is nestled into the base of a hill surrounded by mature trees and next to local landmarks such as Fishburne Military School, (est. 1879), the public library, the Downtown Historic District, and some of the oldest architecture in the city. Its neighborhood is one of Waynesboro’s first-born subdivisions, the Historic Tree Streets, (designated in 2002.) The Waynesboro Company, (chartered in 1889), was one of several residential developers to take advantage of the significant economical growth at the turn of the 20th century; due in part to the appearance of the Norfolk & Western Railroad, and the industrialization happening across the river in the newly incorporated town of Basic City. The W’boro Co. purchased the majority of their 251 acre tract from John G. Guthrie and wife, then known as the Callahan Farm in Jan 1890. The future residential development was advertised as the premier place to live. According to local historian, George Hawke, the company’s prospectus touted “abundant water, ‘untold mineral wealth’, fine schools & churches“.

The Waynesboro Company upheld their residential vision of elegance by establishing deed covenants. New owners were prohibited from building closer than fifteen feet to front lot lines, were encouraged to “plant shade trees and otherwise beautify” their surroundings. As a quality control measure, the new build must be valued at $1000 or more. 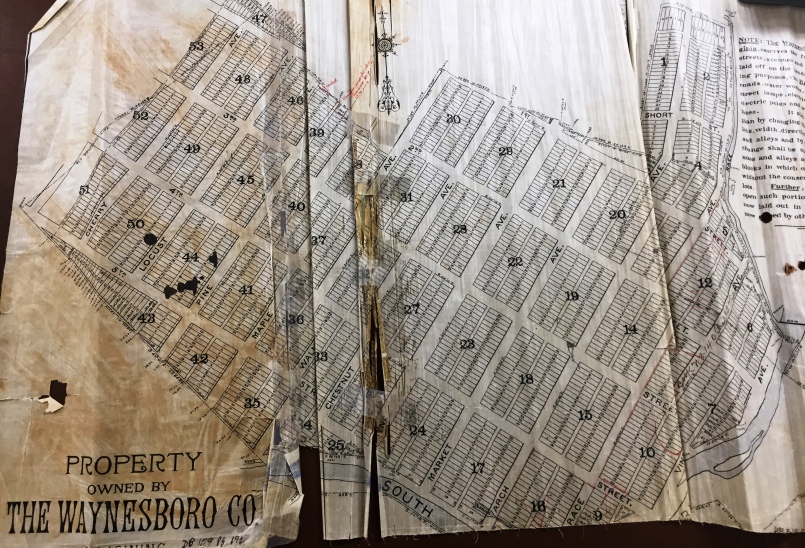 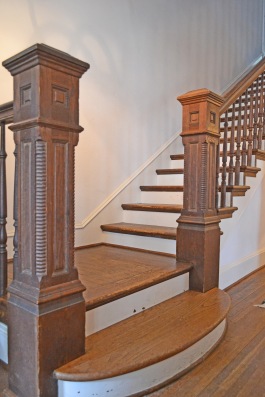 The heart of a home…

An experienced contractor once told me that you can “judge the integrity of a home by its heart, its newel post.” Well, the Patrick House boasts not just one newel post, but TWO s-t-u-r-d-y newel posts which gracefully lead to the upstairs. Its present and past owners sure have had a lot of heart as well. The current owner, Mr. Robin Hersey bought the home in 1982 from the last of the three generations that resided there. 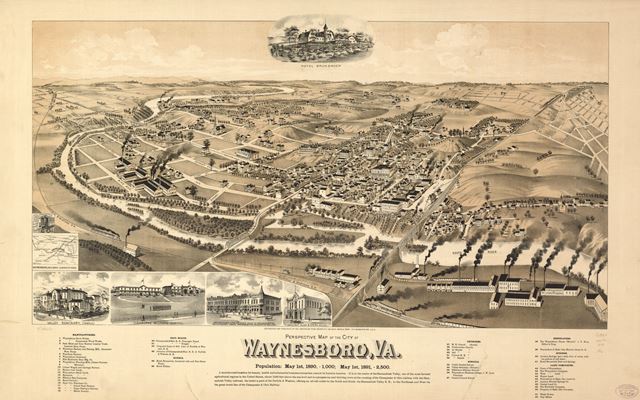 In April of 1890, Mrs. Hettie Caruthers Massie Patrick purchased 337 Chestnut Ave as a real estate investment from The Waynesboro Company. Conveniently, the counsel of said W’boro Co. was Mrs. Patrick’s esteemed son, William Patrick. (*Side Note – Mr. Patrick was deeply involved in the progression of Waynesboro. He was also a well-respected and prominent attorney practicing in near-by Staunton. He was a major contributor to the construction and design of the current Augusta County Courthouse, c. 1901. Mr. Patrick hired the same architect, T.J. Collins, to design his own Queen Anne Victorian residence in Staunton.) 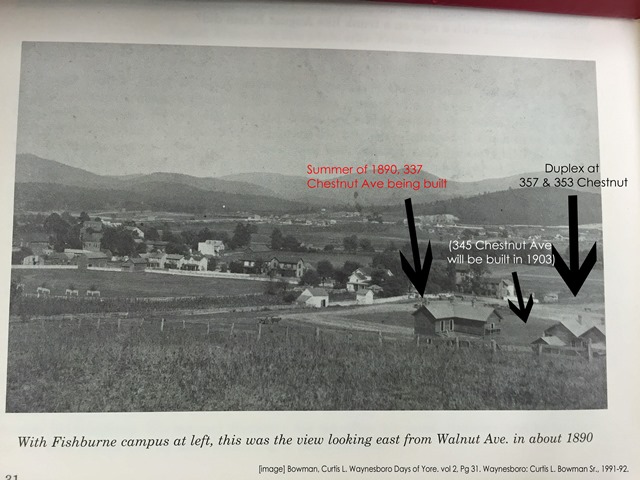 Mrs. H. C. Massie Patrick was born in 1823, the daughter of Nathaniel Massie and Mary Susan Woods Massie in Waynesboro, Va. Her father was a successful merchant and Virginia house delegate prior to the Civil War. The Massie’s were some of Waynesboro’s earliest “movers & shakers” . Miss Hettie lived in Waynesboro until marrying Maj. William Patrick. 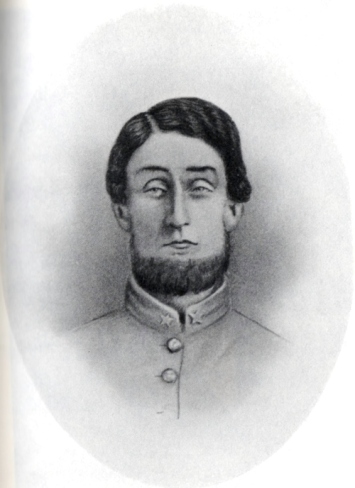 Maj. William Patrick was the second son in the equally pedigreed Patrick family. Maj. Wm Patrick’s lineage can be traced back to his Scotch-Irish immigrant descendants who purchased land from Robert Turk in the mid-1700’s. The Patrick homestead, Locust Isle, is located a few miles north of W’boro along Rockfish Rd. This is where Hettie lived the majority of her adult life. Maj. Patrick, then a Captain, led Company E out of Waynesboro as the war began but was wounded while leading the charge as a Major of the 17th Virginia Cavalry. Tragically, he was killed at the Second Battle of Manassas in Sept. 1862.

“He fell in the attack while setting an example of gallantry to his men well worthy of imitation.” [Battle of Second Manassas: Official report of Lieut. General Thomas J. “Stonewall” Jackson]

“…He lived long enough to witness the triumph of our arms and expired thus in the arms of victory. The sacrifice was noble, but the loss to us irreparable.” [J .E. B. Stuart]

“…I was greatly attached to William, not only as a brother in law, but as an old friend of my childhood & early school days – There were few I had a higher respect of regard for personally & none I shall miss more- no more highminded honorable gentleman, and no braver truer spirit fought and fell on the sacred soil of Manassas…” [Letter from Hettie’s brother, N. H. Massie dated Sept. 9, 1862]

Though Maj. Wm Patrick’s service and ultimate sacrifice brought honor to the family, Mrs. Patrick was left a widow to raise her five children alone. The story of his death was their infant daughter, Nannie’s cradle song. Nannie “grew up strong and self-reliant, gracious and vivacious in her manner and attractive in her person“, attributed to her mother, Hettie’s “strong personality“. Hettie became the family matriarch, and along with her younger & physically limited brother-in-law, James, was responsible for keeping Locust Isle running during the harsh Reconstruction years after the Civil War. Maj. Patrick had incurred considerable debt during his time in service, and those creditors came ‘a calling soon after the war’s end. Mrs. Patrick was forced to sell any holdings her dearly departed husband had in exchange for keeping the family homestead.

Mrs. H. C. Patrick moved back to Waynesboro and officially lived in 337 Chestnut Ave the Fall of 1907.  (She acquired neighboring lots 7 & 8 from the heirs of Dr. John S. Myers at this time.) She lived there with her son, Charles M. Patrick, her widowed daughter, Nannie M. Arbuckle, and her granddaughter, Marian “May” D. Arbuckle. Even though the family had lived out in the country previously, they had identified as townsfolk. They regularly attended W’boro’s First Presbyterian Church, (located in the old Valley News-Virginian building prior to moving to its current location on Wayne Ave in 1911), and the majority of their friends lived in town. 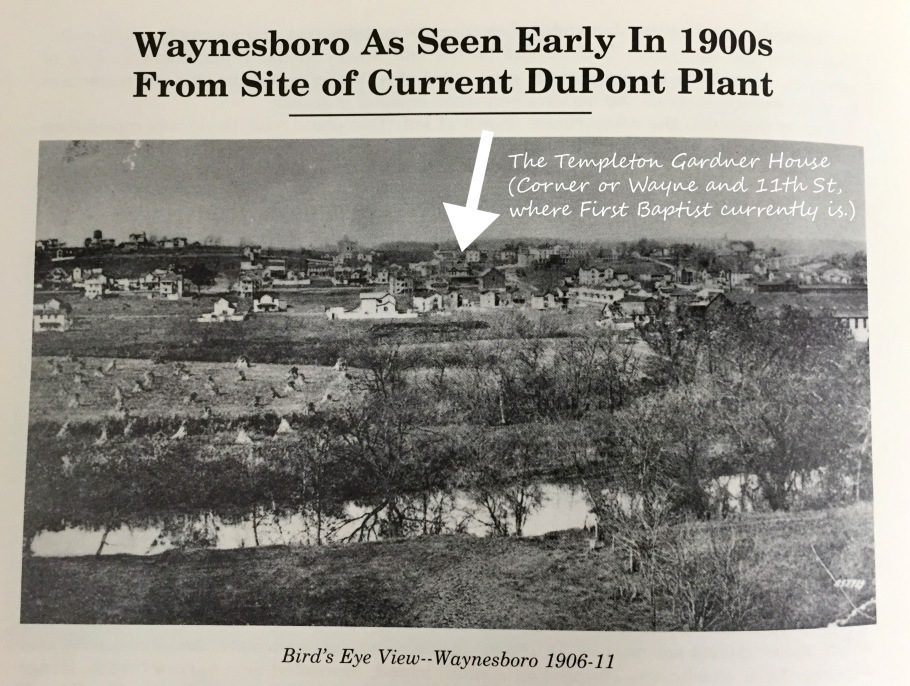 A View from across the River, 1907-1911. Tree Street District is upper third of image. (Bowman, Curtis L. Waynesboro Days of Yore, Vol 1) 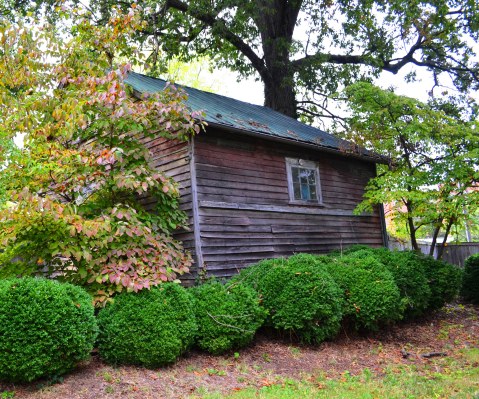 The transition to the city was almost seamless except for Charles missing his horses. Even though he was still managing the Locust Isle farm regularly, he missed having his furry companions close-by. In 1910, he had the “stable” built out back for his own horse and an extra for the ladies to use when needed. (The present small garage facing the alley.) Miss May mentions in her 1977 interview that they never would have purchased their first car, if her Uncle Charlie’s last horse hadn’t died. (In case you are interested – According to Miss May, “Doc Smith, the dentist” was the first Waynesborian to own an automobile.)

In April 1910, Mrs. Hettie C.M. Patrick passed away.  She was described as being “a woman of queenly presence, fine, gentle, and motherly, filling all of the stations of life with dignity and grace.” (*Mental Note: Leave this description with family member for inclusion in my own obituary.) Charles and Nannie inherited both Locust Isle and the home on Chestnut. Miss May spent much of her time taking care of her often ill mother. After Nannie’s passing in 1921, Miss May took care of her Uncle Charles, who left this earth in 1930.

At some point the house was separated into two apartments with Miss May renting out one side to D. K. Coolidge. (The only present evidence of this division is the “second” door on the front porch.) Miss May spent her days as a contributing member of First Presbyterian Church, the Library Board in the early 1900’s, as well as on the Hospital Board in the 1940’s. She was close with many neighbors on her street, specifically mentioning Mrs. Clark and Mrs. Guy Hamilton as her “great friends”. In her 1978 interview, she mentioned their namesakes were used in naming the popular Baldwin Sisters from the 1970’s hit, The Waltons. The director of The Homecoming: A Walton’s Christmas special was Fielder Cook. He visited W’boro as a youth, and as an adult he would visit Miss May.

337 Chestnut (TOO LATE, Property has SOLD)…The home has four large bedrooms & two and a half baths. Original craftsmanship can be seen and felt throughout. The home has an updated kitchen, featuring a Thermador six-burner gas range and glass fronted maple cabinets. Brand NEW Dual-zoned Heating & Air Conditioning, Hot Water Heater, and water line from street to property replaced. If you wish to continue this home’s early 20th century legacy of hosting afternoon Euchre card games, please give me a jingle.

Appropriately, I leave you with Miss May’s personal sentiments regarding her home…

“Well, I’ll tell you, houses that were built when this one was built, were built well. I wouldn’t trade my old house for these new things that warp before you get into ’em.” 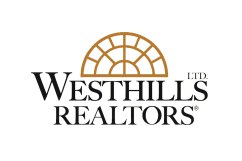 4 thoughts on “It all started with a house… The Patrick House: 337 Chestnut Avenue”